AFCON - ACADEMIC FREEDOM COALITION OF NEBRASKA
If you are a student, teacher, instructor, professor, author, or librarian, and you believe your rights to speak, write, or display the truth as you see it are threatened in an educational context, please contact an AFCON officer. 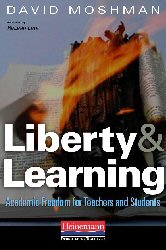 Learning without liberty is indoctrination, not education.
-David Moshman

Academic freedom, argues David Moshman, is neither a special privilege of college faculty nor a First Amendment right of individual teachers and students. Rather, academic freedom is intellectual freedom in academic contexts, consisting of five principles that everyone is obligated to respect:
Moshman succinctly shows readers how these principles resolve some of the most intractable problems facing education today. On matters ranging from evolution to sex education to the literary canon, his principles address the concerns of teachers, administrators, students, parents, and their communities alike, providing tools that promote real student learning and thinking.

David Moshman addresses academic freedom issues in his blog at The Huffington Post.

Freedom to Discriminate?
An Essay by David Moshman

Many public schools and colleges permit student groups to be officially recognized, which may enable use of the school's name or logo or enhance access to funds, facilities, or channels of communication. Some require, as a condition of official recognition and the associated privileges, that the group must be open to all of the school's students. In Christian Legal Society v. Martinez , decided June 28, 2010, the U.S. Supreme Court ruled that such a criterion is viewpoint-neutral and reasonable, and thus consistent with the First Amendment.

To say that a policy is reasonable and legal, however, is not to say that it is best, and the Court was clear that it was making no such judgment. The Court's ruling leaves schools and colleges free to decide for themselves whether to enforce nondiscrimination requirements on voluntary student groups as a condition for recognition.

What should they do? To the best of my recollection, AFCON has never faced this issue in Nebraska. I addressed it last year, however, in Case 11-6 of my Liberty & Learning :

Case 11-6. Your school requires that recognized student groups be open to all students on a nondiscriminatory basis, without regard to race, sex, religion, sexual orientation, or other such characteristics. A Christian group adopts a charter that limits its membership to Christians. What should be done?

Your school's nondiscrimination requirement can perhaps be justified on the ground that no group is required to seek recognition as an official student group. Such recognition, it might be argued, should be sought and granted only in the case of groups open to all students. Students, like all persons, remain free to form and join groups with discriminatory membership requirements but they have no right to be recognized as an official student group if their group is not in fact open to all students. If students wish to form a chess club open only to whites or heterosexuals they are free to do so, but any chess club recognized by the school must be open to all students regardless of race or sexual orientation.

But what about religion? A chess club that bans Muslims is no less problematical than one that bans gays or African Americans. But a Christian club open only to Christians is not so clearly objectionable. A case might be made for maintaining a general requirement of nondiscrimination but exempting religious groups that wish to discriminate on religious grounds.

But what if African American students wish to form an African American student group open only to African Americans? What if the Young Democrats are leery of having Republican members, or vice versa? Allowing exemptions only for religious groups might be seen as unfairly privileging religious groups over others and, in a public school, might even be an unconstitutional preference for religion. A school might reasonably seek to avoid this problem by denying exemptions to any group. Students would remain free to form groups focused on matters of special concern to Christians, African Americans, Democrats, gays, or any other population ¾ but for a group to be recognized as an official student group it would have to be open to all interested students regardless of religion, race, political affiliation, or sexual orientation.

In the case of a voluntary group, however, there is something slightly perverse about restricting its freedom to determine its own membership. Given such freedom, most student groups will probably choose to be open to all interested students. All students will thus be free to join most, if not all, groups. Although the school itself must be committed to nondiscrimination, a case can be made for eliminating nondiscrimination requirements for voluntary groups.

Another option fully consistent with academic freedom is to maintain a nondiscrimination requirement as the default option but allow any group to opt out by providing its own alternative membership requirements. This would encourage a policy of nondiscrimination but would also encourage reflection on that policy and would leave voluntary student groups free to make their own choices.